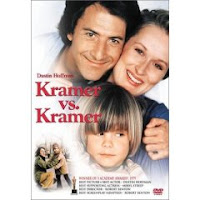 Although my TV is gone, I can still watch plenty of movies on my laptop (and kudos to my brother for ordering me a widescreen, giving me the full viewing experience). My public library offers oodles of movies, with no late fees and two week check-out intervals, so I've been strategically building my Netflix and library lists. Whenever I run across a movie I want to see, I check the library first. Only if the library doesn't have it do I add it to my Netflix list.
So, the library did have a copy of Kramer vs. Kramer, which I had never seen, until last night. The story line is vastly different from most of the movies that deal with children of divorce today, because it reflects a different era. Some early reviewers of my book questioned a comment I made about most of us living with our mothers. Back in the 70s, that was the reality. The court system was skewed toward mothers getting custody of children. Kramer vs. Kramer shows that reality.

If you haven't seen the movie, Meryl Streep plays the role of Joanna Kramer who leaves her husband (played by Dustin Hoffman) and young son to "find herself." After stumbling upon herself in California, she returns to seek custody of Billy. Although he's been the sole caretaker of their son for a year and a half, Ted Kramer finds himself in a desperate fight to retain custody.

I won't spoil the outcome for you. This was a good movie though. The parents were portrayed as flawed individuals who were both, at one time or another, good parents and lousy parents. Little Billy, caught in the middle of all this, is written believably, as a normal boy who wonders what has happened to his family, who misses his mom, and who bonds with his dad in a new way after mom leaves. If you haven't seen it, it's a good addition to the children of divorce movie library.
Posted by Kristine at 10:43 AM