No way to tell 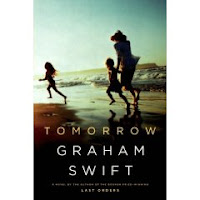 From a book review of Graham Swift's novel, Tomorrow:

The parents of 16-year-old twins plan to announce their divorce to the children -- tomorrow. Thus, much of the novel happens the night before, inside the mother's insomniacal mind. (This is not to betray any surprise -- the reader learns of the announcement on page 5.) And yes, Swift is writing from a female point of view.

The story, then, is of the night before tomorrow, as Paula, the wife and mother, replays her married life -- the full story which she would like to tell her children -- while her husband slumbers next to her. Of course, there is no way to tell the children of divorce the whole story, so a wistfulness falls over her recollections. Really, she is telling herself the story of her marriage, and this is the heart of the novel.

The New Yorker panned this novel (see Amazon's editorial reviews) and I'm not rushing out to read it. But I was intrigued by the reviewer's statement above that "of course, there is no way to tell the children of divorce the whole story." I'm sure that's true in the sense that there are things that happen between two people in a marriage--especially one that lasts 16+ years--that no one else is going to fully understand. And I would certainly agree that parents don't need to (and probably shouldn't) trot out every detail of their marriage's failures for their kids' inspection. Still, it troubles me--not that the novelist would depict the mother as feeling this way, but that the reviewer would accept it as absolute truth.

Then again, maybe it just struck me as a vivid contrast to the post I just did on the NPR "This I Believe" essay.
Posted by Kristine at 11:02 AM