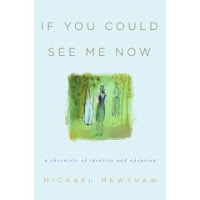 I subscribe to an online nonfiction book club and just picked up from the library one of the selections from a few weeks back that had intrigued me. It's the story of a girl looking for her adoptive parents. More precisely, it's the story of the man she contacts believing him to be her birth father.

As Michael Mewshaw tells his story in If You Could See Me Now, he tells of growing up as the son of parents who divorced during World War II. His mother harbored deep resentment toward Michael's father, telling her sons that their dad was a gambler who had left them ruined financially and scandalized morally. Mewshaw writes:

"When, many years later, I found the nerve to ask him about his first marriage and the part that gambling had played in its failure, he curtly replied, 'Whatever I did, you and Pat and your mother never wanted for anything.'

"I wish I had had the courage to inform my father that there were things I wanted and never had. I wanted to know him. I wanted his love and approval and his presence in my life. What I got instead--well, it wasn't without value. Early on I learned a basic premise of art--the paradoxical importance of silence in music, blank spaces on a page of poetry. While what happens to kids has inescapable consequences, what doesn't happen can have even greater impact."