Random thing #1:
I really, REALLY hate mosquitoes. Their existence is enough to make me wonder sometimes if God really knows what He's doing -- or at least His wisdom at letting them onto the Ark. I have to believe they only appeared after the Fall, one of those nasty results of sin that didn't exist in the original perfect Eden. I just spent a measly twenty minutes in the back yard mowing the grass, watering my newly-planted and already wilting pansies, and spreading sand over a former flower bed in preparation for a fab new patio I'm envisioning. Now, sitting back inside I can count at least five huge mosquito welts, despite having only my arms exposed and spraying Off liberally over them before I went out. (Next time, I'm grabbing the MaxiDeet instead.) I've always been a tasty treat for mosquitoes and have always been more than ordinarily allergic to them -- hence, the welts, not tame little bites. Darn the little buggers! If I could DDT my back yard, I would gladly do it and kiss organic gardening goodbye. 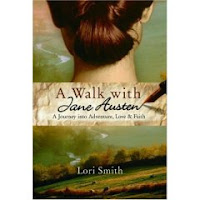 Random Thing #2:
This one is much happier. My dear friend Lori's new book A Walk with Jane Austen: A Journey into Adventure, Love, and Faith is now available for pre-orders on Amazon.com and will be in a bookstore near you on October 16. Lori is getting many fabulous reviews, which doesn't surprise me one bit because I've been reading drafts of this book for more than a year and have loved it from the very beginning. If you pre-order on Amazon now, you get an additional discount, so go order yours now!
Posted by Kristine at 1:32 PM

Maybe God put those mosquitos on the Ark just to bug us.

Seriously, when I hear people question the wisdom of God or the existence of God based on something going "wrong" in their life, or based upon worldwide pain & suffering, they are basically saying, "If God exists, there would not be so much suffering in the world, or in my life." (Kristine, I'm not suggesting that you actually believe this, but the mosquito story just brought all this to mind.) I would counter that the existence of pain, suffering, disappointment and frustration is irrelevant to the proof of God's wisdom or existence or even his omnipotence. What it *does* bring into question is His "goodness" or at least "niceness", or "loving nature".

It's almost amusing to me how modern people try to equate bad things with the absence of God, instead of considering that maybe God doesn't like them. Maybe God is all powerful, yet mean. Or, maybe God is testing us, working on our character in ways that we don't like. That is really the most logical conclusion to draw - just like that 80s movie, "The Gods Must Be Angry". That is what ancient people and primitive people used to believe, and thus, they sacrificed to the gods to try to appease them.

I don't know how that concept has disappeared from our logical thinking about God, except that in modern times we have elevated human beings so much that we assume that if there is a God, He owes us happiness. When we're not happy, we conclude God doesn't exist, or maybe that he went away and is ignoring us. Personally, I never consider that God is away or ignoring me - I figure He is just working on me, testing me, "bugging me" and making me work harder and endure more than I feel like. I get exasperated and say, "Hey, let me up! I've had enough!"

The Gospel story is so amazing and surprising because it says that in spite of ourselves, God sent his own Son to appease His anger. The world is fallen, bad things happen, and God also causes and allows trials to come into our lives that we don't understand. Martin-Lloyd Jones called it "being in God's gymnasium". His ways are not our ways. We can know that God loves us when we contemplate the good things in nature, and especially when we go back to the cross. That is really the main proof that God loves us.

I think that's why the church used to drill John 3:16 and "Jesus loves me, this I know" into us as kids - we need to remember that God loves us when things go wrong, when there are all sorts of disappointments and gut-wrenching things in our lives. The Scripture never even contemplates that rational people would actually believe that God didn't exist - Romans 1 says that when people reject the obvious truth of God's existence, they become fools, and God doesn't argue with fools. But when we wonder why things are so disappointing in our lives, He reminds us that He loves us, and that He has a plan that we will grasp one day.

These are excellent points. I was, of course, being tongue in cheek about questioning God because of mosquitoes...but it wouldn't surprise me at all to find out that they didn't exist (or at least that we weren't allergic to them) before the Fall.

I think part of our problem with the notion of testing is our faulty perception. We are necessarily self-focused and simply lack God's perspective. There may be many times when what we perceive as a test, or a bad thing, is really God's grace and blessing in our lives. How many times have we seen that what looked like something bad at the time ended up being the cause of something good in our lives.

In my book (coming soon!), I talk about how we usually only get an "after the fact" look at what God is doing. We see and understand His plan (if at all) only after it has all unfolded. We can't see where He's going, what the path ahead holds, but we can see where He's been, how the path behind us is marked with His footprints.

And yes, in this case, even the mosquitoes turned out to be good, because they sparked this great conversation about God's character and love. Sigh. Maybe they're not all evil after all.