Sex and the single child of divorce 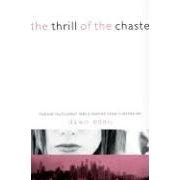 I got an advance copy of Dawn Eden's soon-to-be-released book, The Thrill of the Chaste. As one of my friends put it, chastity isn't my idea of a thrill. But Dawn's book is great. Really. I've read a lot of "wait for marriage" books in my years as a single Christian, and many of them have merit, but many are also pretty sappy and just a tad naive. Which is fine, I guess, if you grew up in the "Christian bubble," as another friend puts it. Dawn's book, however, joins Lauren Winner's Real Sex as a counterpart to the buttoned-up philosophy that most Christian books on this topic previously adopted. Bandying about Sex & the City and other pop culture icons, Dawn is honest about her own struggles to live chastely. She's encouraging, biblical, and fun to read.

Turns out Dawn is also a child of divorce. Her mom and dad split when she was five. Like many parents of that era, Dawn's believed that if they split nicely no one would get hurt. We know better now. She talks about how her parents' negativity about each other made her cynical at an early age and how she learned that her dad was mostly interested in what she did, not who she was (because he wasn't around enough to know who she was). Watching her mom struggle alone for many years, Dawn learned that "a woman can be highly intelligent and beautiful, and yet have a tremendously difficult time meeting a responsible, gentlemanly man who wishes to be married for life." (And I thought it was just me...) As her mom, whom she loved and admired, dated a string of nice but noncommittal men, Dawn "wondered if there were any men capable of seeing and appreciating inner beauty." She explores how her relationships with her parents affected her view of sex and marriage and how they affected her relationships with men. Near thirty, she realized she was unconciously sabotaging relationships, certain her boyfriends would abandon her the way her father had and determined to beat them to the punch. Dawn acknowledges that children of divorce can blame mom and dad pretty easily for the problems we deal with in life, and she urges us not to do it. Her own healing began when her relationships with her parents were healed, particularly the one with her father. She winds up by encouraging us to learn from our parents' mistakes, to realize that they tried to look out for us, to recognize that they're human, and to forgive them, "because they're not getting any younger, and neither are you. Because God says so. And...because every effort you make to forgive your parents will bring you healing and strength for the journey ahead."
Posted by Kristine at 9:20 PM