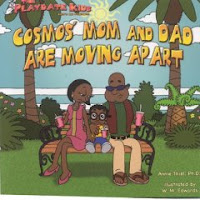 Recently, I was asked to review some new children's books about divorce, Cosmos' Mom and Dad Are Moving Apart and Cosmos' Blended Family. Written by Dr. Annie Thiel, a child psychologist, mother, and grandmother, these books are delightfully illustrated by W. M. Edwards and are part of a series that features four children who deal with different life issues.


In the first book, Cosmos starts out living with a Mom and Dad who spend a lot of time yelling (possibly about the fact that Dad wears sunglasses indoors and wears flip-flops with everything, including turtleneck sweaters and suits). When Cosmos hears that his parents are divorcing, he thinks maybe he is to blame and is reassured that he is not. He is told that whatever feelings he has are fine. At school, he talks to his classmates, with mixed reactions; some kids understand, but some make fun of him, a nice touch of realism. By the end of the book, Cosmos has settled into a new routine of weekdays at Dad's house and weekends at Mom's.

Some of the conversations in the book are a little contrived, like when a playmate tells Cosmos, "I feel special that you shared something so important with me." Perhaps the playmate in the story is a budding Dr. Phil. (The second book does a better job of creating realistic conversation.)

Reading about Cosmos taking clothes and toys to his Mom's new apartment so he will feel comfortable there highlighted for me that many children, in essence, lose their home--home now becomes "Dad's house" and "Mom's house" without being "my house," because of course it is now "my houses" or "the two places I go between, neither one of which is really fully mine." But the view of Cosmos' two bedrooms, different but equally messy and strewn with similar toys that show his interests, and Mom and Dad both standing over him, scowling at the mess, showed that Cosmos has a place in each of their homes. 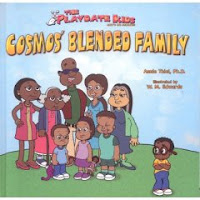 In the sequel, Cosmos' Blended Family, Cosmos has a lot of special times with his Dad until Dad starts bringing his new friend Ellen and her kids home. Once they get married, Cosmos has to share a bedroom, to share his time with Dad, and to give up some of the special things they did together before. (The picture on the front cover, of Cosmos standing alone and apart is telling--and rather heartbreaking.) He tells his Mom that he is unhappy about all of this and she encourages him to talk to his Dad. When he does, Dad agrees to spend special time just with Cosmos, and Cosmos learns to get along with Ellen's kids and to appreciate his new blended family.

One of the nice features about these books is the first page. Before jumping into the story, there is a quick overview by Cosmos letting us know who the main characters are and what the story is about. These stories are rather obviously written to address a specific topic and to provide a non-threatening way to talk with young children about some of the issues surrounding divorce and remarriage. So while an overview might spoil a story written purely for the pleasure of story, in this case I felt that it set the tone. I also appreciate that the overview means kids won't suddenly have Cosmos' situation sprung on them mid-story. They'll know up front what's coming.

At the end of each book, there is a list of 10 "things to remember" directed at the child and a list of 3 "super cool" activities. These items reinforce the material in the story and could provide helpful talking points for parents or other adults in the child's life, particularly the first time the story is read. And Cosmos is such a fun little boy, I suspect children are going to want to hear his story read again and again for its own sake, not just once as a form of therapy.

I loved the fun illustrations in these books and while some of the advice being given to Cosmos was a little contrived, I thought these were really well done on the whole.

There is no faith element to these stories, which makes them accessible to a wide audience, but of course I would love to see a book like this that includes faith. DC4K (DivorceCare for Kids) has a storybook available (without pictures) that can be purchased through Parable, and I know they had a specific reason (which they explain in the forward) for not using pictures. I would love, however, to see a book as engaging and stylishly illustrated as these Playdate Kids books for the Christian market.
Posted by Kristine at 9:54 PM