Sitting on the front porch together 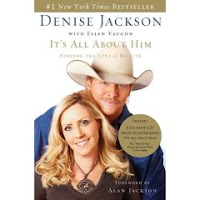 I just finished reading the best-selling memoir by Denise Jackson, wife of country music star Alan Jackson, It's All About Him. This book has flown off shelves, and woven through every chapter of this story is the thread of Scripture and God's love. I couldn't help but think about all the people who bought this book for the celebrity story and instead found a story about someone much more famous.

The Jacksons were teenage sweethearts and married young. After eighteen years of marriage, however, Alan had an affair and moved out. During their separation, Denise sought God and learned how to become her own person outside the shadow of her famous husband.

After several months apart, Alan asked Denise on a date. At dinner, he asked his wife how their three girls were handling the separation. Denise angrily responded:

After that rocky start, the Jacksons eventually reconciled and Alan moved back home. Denise writes:

Tears welled up in my eyes as he told the children that he was here to stay.

"Girls, I want you to know something," he said. "Fifty years from now, when you are grown and have families of your own, your mama and I will still be together. You don't need to worry. We'll be right here, sitting in rocking chairs on the front porch together."

Included in the book (at least in the copy I got from my local library) is a CD with two songs by Alan Jackson. The first shares its title with the book, It's All About Him, and the second is a song that he sang to his wife on their wedding day and again nearly twenty years later when they renewed their vows.
Posted by Kristine at 10:28 PM