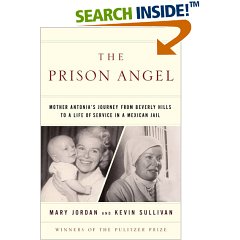 In one of those strange role reversals that often take place between kids and their divorced parents, we kids often become very protective of our parents. I was reminded of this reading a great book, Prison Angel, about a twice-divorced mother and grandmother who left a life of privilege in Beverly Hills to become a nun living and working in a Tijuana prison. Her youngest child was a teenager and still at home when she first began going to the prison for short visits. From page 74 of the hardback edition:

"I saw my dad go on and get remarried, and he had his own life," he says. "My brothers and sisters, they had their lives, they were married. Everyone was on their own and taken care of, and my mom was by herself. She was doing this work in Mexico that was really hard. I wanted her to find somebody to love her."

Mother Antonio was distressed about how much Anthony worried about her...