Jesus and the rabbis 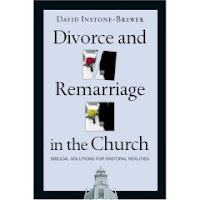 I'm reading David Instone-Brewer's excellent book Divorce and Remarriage in the Church. So far, I've made it to chapter 5 and, based on my reading thus far, I can heartily recommend this book.

Instone-Brewer applies his extensive study of Jewish rabbinical thought to the biblical passages on divorce. The teachings of the ancient rabbis represent an enormous gap in modern Christian thinking generally (not just as it applies to divorce), as I began to discover years ago when I started reading Chaim Potok's novels. Potok writes about Jewish characters and is usually exploring the conflict between branches of Judaism. Most famously, in The Chosen, he contrasted Hasidic and Orthodox Judaism. Reading Potok's passages on what the different rabbis thought about this or that Old Testament (for us) teaching gave me a deeper and richer understanding of my Christian faith. In that tradition, Instone-Brewer asserts what I have read elsewhere: that Jesus' teaching on divorce in Matthew 5, in response to a question from the Pharisees, is basically His way of deciding between the divergent teachings of Rabbi Hillel and Rabbi Shammei. Understood in that context, Jesus' teaching takes on a very different meaning than the Christian church has traditionally taught.

Ultimately, this argument has extremely modern applications since it centers on whether divorce can be obtained without cause. Jesus says, no; there are allowances for divorce in the law, but they are for specific reasons and can only be initiated by the wronged party. Divorcing for reasons outside of the law constitutes an invalid divorce. If the divorce is invalid, than so is a subsequent remarriage.

When I was growing up, much of conservative Christianity taught that any remarriage after a divorce constituted adultery. If Instone-Brewer is right (and you'll have to read his book and follow his thesis to decide that), than this teaching is false; and if it is false, than the church has wrongly subjected those who have divorced biblically and their children to unwarranted shame and condemnation.

Furthermore, Instone-Brewer acknowledges (though indirectly--at least through chapter 5) one of the bitter complaints that comes up so often among divorced folks: namely, support payments. According to Instone-Brewer, if a Jewish man in Jesus' time divorced his wife because she had broken the marital vows, she was not entitled to a settlement of any kind. But while Jewish men of the first century liked having the easy out of a divorce for any cause, their wives also liked it because, having not been found guilty of violating their vows, they were entitled to a settlement from their husbands, one that was often sufficient to care for them for the rest of their lives. Do you catch the modern application here? If we followed biblical models for divorce, we wouldn't have all these bitter exes complaining about the money they have to pay for spousal support.
More to come as I keep reading.
Posted by Kristine at 9:50 PM

Bless you...yes, Dr. Instone-Brewer's work is an important piece of teaching that has shaped our church's position regarding these matters...I believe he is biblically correct...also check out John Frame (RTS Orlando professor) and his work "recent reflections on divorce"...